Thank you for your patience while we retrieve your images.

In the early 1900s colossal five story high, 60-foot, steam pumps delivered water to the city of Buffalo. These mammoth steam pumps still sit along side their smaller replacements, and have attracted attention from pump and steam engine enthusiasts.
These photos offer a glimpse inside of the fabulous Col. Francis G. Ward Pumping Station, in Buffalo, NY, featuring the five Holly Steam Engines. In 1851, Birdsill Holley moved to Lockport, New York, where he established Holly Manufacturing Company in 1859. His company was responsible for the manufacturing of these engines.

Here are some impressive facts about the station:

The five Holly Steam Pumps were installed in 1914
The 60 ft. giants operated until the late 1970s
They weigh in at 1100 tons apiece
They were the largest engines ever built by the Holly Manufacturing Company
Each one pumped 30 million gallons of water a day.
Aside from the magnificent pumps, the other attraction is the building itself, with arched windows, tile walls, iron railings and street lights along the balcony.

The pumping station went online in 1915 and housed five steam driven pumps that each weigh 1100 tons and stand 60 feet tall. Each 1200 horsepower steam engine has two 30 ton flywheels that drove piston pumps capable of discharging 30 million gallons per day through 48 inch pipes. The steam pumps were manufactured by the Holley Steam Company of Lockport NY. 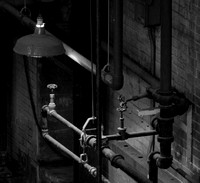 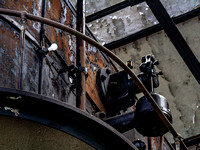